History of the Education Program 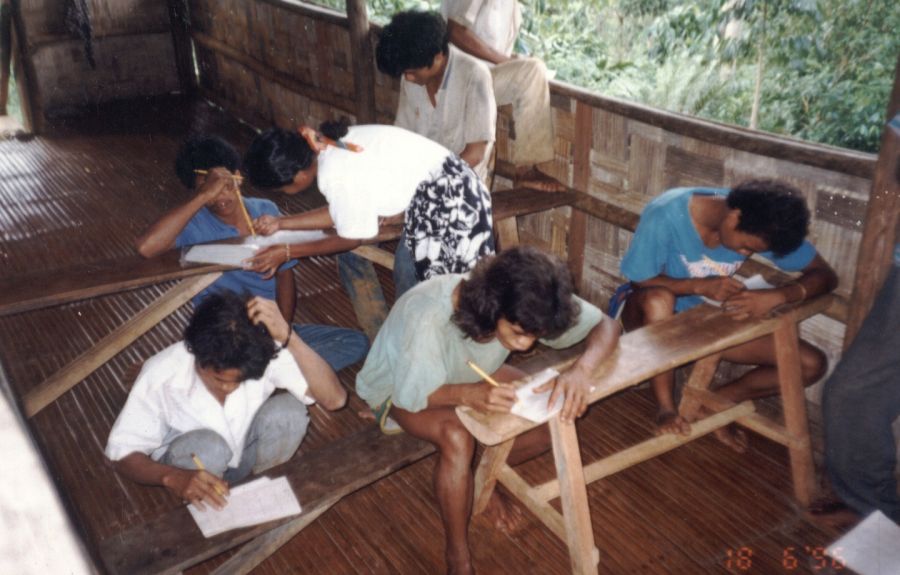 Beginnings of the Education Program In the late 1980s, the nearest public school to Bendum was three hours away on foot: a walk too long and dangerous for school children. The community willingly contributed their resources towards the establishment of an education program. They built a classroom in the hopes that government would send them a teacher. At that time, basic services in the community were limited and there seemed to be no potential for government support.

In 1992, the community began working with an external support organization. To understand the community’s needs and priorities, a series of consultations with community members were held. The need for education was highlighted amidst a range of interrelated concerns: water and health, abaca production, rattan and timber extraction, land security, and peace and stability. Adult literacy classes in the 1990s

By 1993, a basic literacy program (reading, writing, and arithmetic) for children and adults was in place, with two volunteer teachers. The classes were conducted in the mother tongue, because the community wanted an education that would give their children useful skills for community life. The literacy program progressed from having two levels in 1993 to three levels in 1994.

The community highlighted the need for an accessible school and they saw education as not only a priority but as critical in addressing their other concerns such as health and livelihood. They also wanted an education that would not alienate the children from the community and the culture. Gradually, with help from the external organization, the community began to explore the possibility of developing an education program that would be of the culture and respond to community needs, and yet still enable children to advance in the formal education ladder. They called this initiative a Cultural Education Program and the school, the Cultural Education Center. From 1994 to 1999, the external organization conducted research activities in the community where the people’s cultural practices and knowledge about their land and resources were documented. These were done through focus group discussions, interviews with key persons, and community mapping of the domain and the resources therein. The external organization worked with local volunteers to determine where these local and cultural knowledge could be integrated in an elementary school curriculum.

Formalization of the Education Program

In 1995, a formal set-up was initiated wherein the school accepted students for Grades 1 to 4 and held classes in the required elementary school subjects, with additional cultural subjects in the form of Our Language, Our Culture, and Our Livelihood. Cultural knowledge and strategies were also integrated in the mainstream subjects. Grade 5 was introduced the following year and in 1998, a series of textbooks called Magkinanau Kuy: Pagsulat daw Pagbasa 1-6 (Let Us Learn: Reading and Writing 1-6) were published. These textbooks contain mostly language lessons and reading materials on local stories and legends. Beyond that, they contain articles that talk about different aspects of the culture like products, dances, rituals and beliefs. There are also articles about cultural knowledge like the Pulangiyen classification of forests and stories about local history and community concerns.

The set-up established in 1995 was that of a formal school, but since there was no official recognition from government, students who completed Grade 5 took the government placement test so they could be proceed to Grade 6 in the public schools.

The government at that time had no framework for dealing with a cultural education program that arose out of the community’s expressed needs and wishes. They recognized two types of schools—public and private—and had no experience dealing with a culturally-adapted curriculum. The late 1990s and early 2000s, then, were spent dialoguing with the government about the validity and effectiveness of this kind of education for Indigenous Peoples.

The kind of education that developed in Bendum gradually came to be called culture-based education. It is different from mainstream education in that uses the mother tongue to teach, it includes cultural subjects where children learn about their culture, and it incorporates cultural knowledge such as on farming and the forest into mainstream subjects such as Science. Furthermore, local volunteers who may not have teaching credentials but who are knowledgeable about the language and culture are recruited to teach. The school calendar also aligns with the community’s farming season, as children are needed at certain points in the farming cycle. Signing at the recognition of APC by DepED

In 2004, the Department of Education issued DepED Order No. 42, s.2004 giving “permission to operate primary schools for Indigenous Peoples.” This paved the way for the education program in Bendum—with its cultural teachers, calendar and curriculum—to be recognized as an alternative but appropriate form of education for indigenous children. The Cultural Education Center received its DepED recognition in 2005 and took on the name Apu Palamguwan Cultural Education Center.