International Talks Give Special Focus to Indigenous Women and Youth (2013) 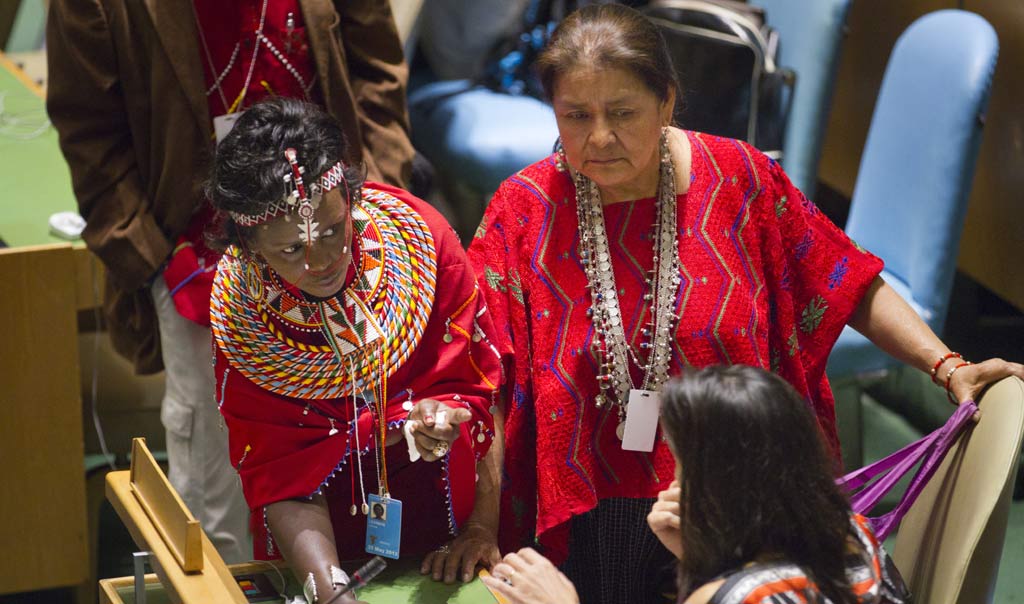 “It is a challenge for us that our students can also talk [like we do about indigenous issues], that the youth can share where they are and be informed. This is part of development,” said Mercy Pakiwag, APC School Administrator, on the final day of APC’s conference on indigenous education last May 17.

Speaking about the role of the youth in safeguarding the future of indigenous rights and culture, Mercy Pakiwag shared her views with the youth who had joined the conference from Davao Oriental:

“We are proud of you, of your coming here. This is a way by which you can help your tribe. I appreciate that there are youth who will pursue and struggle for the importance of culture.  Whatever we have, there will be an inspiration to our life and work.”

The importance of the inclusion of the youth in discussions relating to indigenous rights and culture was one of the topics of APC’s recent conference. This theme was also explored during the 12th Session of the UN Permanent Forum on Indigenous Issues (UNPFII).

Approximately 2,300 indigenous participants gathered on the 20th of May this year for two weeks. This session’s discussions were concerned with culture, education and health, with a special focus on the youth and indigenous groups of Africa and the importance of strengthening ties with international finance institutions.

The discussions on youth issues were centered around the findings of the UN Expert Group Meeting on Indigenous Youth, held earlier this year in January.

Of the 370 million Indigenous Peoples in the world, approximately 67 million are youth [1].

The youth expert group meeting included recommendations on a range of issues, including improved and appropriate education for indigenous youth, and ensuring the participation of indigenous youth in decision making that affects their wellbeing [2].

Youth issues and inclusion is also a priority of UN Secretary-General Ban Ki-Moon, as he has launched the System Wide Action Plan (SWAP), which aims to deepen youth focus in existing UN programs.

In line with these efforts, the UNPFII Secretariat in cooperation with UNICEF and the Indigenous Youth Caucus, an adolescent-friendly version of the UN Declaration on the Rights of Indigenous Peoples has been released.

Speaking at the closing session of the UNPFII on the 31st May, UN Deputy Secretary-General Jan Eliasson said we must work harder to ensure Indigenous Peoples are not marginalized.

“One of the most important challenges is to provide quality education which is culturally appropriate and includes the input of elders and indigenous educators,” he said. Speaking about the development of indigenous higher education institutions he went on to say:

“These education institutions are crucial in providing higher education which incorporates the concepts of indigenous history, language and culture… Denying culture is a denial of rights, a denial of roots and history.”

Speaking about indigenous girls, adolescents and women, Mr Eliasson said: “Indigenous women are one of the most marginalized groups in the world”.

Citing their critical role in indigenous communities and society as educators, peacemakers, mediators, and as custodians of bio-cultural diversity and sustainable practices, Mr. Eliasson said:

“Often they face multifaceted discrimination from and outside their society, including gender-based violence.” He called for the better inclusion of indigenous women in discussions, and related this need to the achievement of the Millennium Development Goals (MDGs) number 3.

Looking forward, the UNPFII discussed plans for the first World Conference of Indigenous Peoples to be held in September 2014, in relation to the post-2015 development agenda.

Mr Ellaisson summarized these discussions in the closing ceremony, stating that the forum has made it clear that the sustainable development agenda should also address the cultural aspects of development.