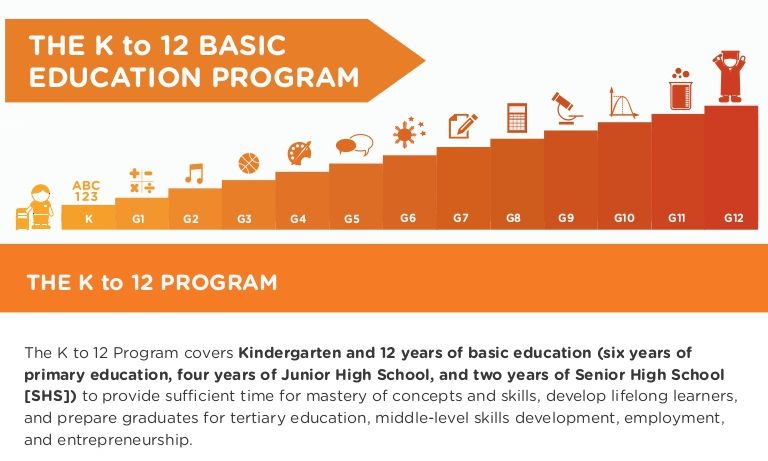 The new law increases basic education from 10 to 12 years in the Philippines, and includes one year of kindergarten. While this additional kindergarten level, which was signed into law under the Kindergarten Education Act (Republic Act No. 10157), began being implemented in SY 2011—12, the first set of students to enter into the additional 2 years of Senior High School will not do so until SY 2016—17.

These two additional years will be structured so that students can specialize in either the core curriculum or one of three tracks—the academic, the technical-vocational training, or the sports and arts track.

Beyond this extension of learning years from Kindergarten to Senior High however, the K—12 Reform provides for changes in the approach to learning in the Philippines.

DepED states that the K to 12 reforms provide for integrated and seamless learning. This change to a ‘spiral progression’ in learning means a greater diversity of subjects are introduced at an earlier age, so that subjects can be connected and integrated—for example, rather than being taught Biology, Chemistry and Physics in consecutive years, these are now integrated into teaching throughout Grades 7—10.

Q. Why has this change been made?

Twelve years of pre-university education has become widely implemented in Asia and the rest of the world. It is the standard requirement for students and professionals abroad—such as under the Bologna Process in the European Union and the Washington Accord in the United States. The Philippines is also the last country in Asia with only 10 years of pre-university training. Speaking during the ceremony, President Aquino said:

“By signing this bill into law, we are not just adding two years of additional learning for our students; we are making certain that the coming generations are empowered to strengthen the very fabric of our society, as well as our economy.”[1]

Q. Have there been any problems in implementation?

While DepED has stated its target to provide some 31 million additional learning materials[2] by the end of 2013, revised learning materials for the K to 12 class are expected to arrive late again, and some teachers have struggled with the basic training they have been given during the recent summer break[3].

Q. How does this apply to indigenous education? What is key for indigenous education are the provisions which build proficiency through mother tongue-based multilingual education (MTB-MLE) and the contextualisation and enhancement of the curriculum so that it is relevant to learners.

“The heart of the K-12 reform is about one’s culture, one’s sense of self…. K-12 takes culture as the bedrock of education”.

The K to 12 reform also implies changes to Alternative Learning System (ALS) curriculum, which requires students to have 2 more years of education before they can enter for the ALS high school equivalency test[2].

At present the K to 12 reform provides for 12 local languages to be used as the means for instruction from Kindergarten through to Grade 6. These are Bahasa Sug, Bikol, Cebuano, Chabacano, Hiligaynon, Iloko, Kapampangan, Maguindanaoan, Meranao, Pangasinense, Tagalog, and Waray2.

While Filipino and English will continue to be the languages of instruction in High School and in the additional Senior High School, the reforms imply the need for services to be provided in three key areas. These are technical –vocational training which is more culturally orientated and contextualised, teacher education institutions which provide training in indigenous cultures and culture-based education and teachers who have a strong grounding in local cultural context and local language.

However, while DepED will allow for ‘private education institutions to hire graduates duly recognised for their expertise in the education sector, when there is a shortage of qualified Licensure Examination for Teachers (LET)’4, this is only on the provision that they are either part-time staff or that they pass the LET within 5 years.

For many schools in more remote areas, finding staff with both the necessary cultural knowledge and also the specific training required by DepED is often impractical and financially impossible. For the move toward ‘learner centered’ education to succeed in the indigenous context, it remains to be seen whether a middle ground can be found whereby DepED can support the training of these teachers and the development of these training institutions, while realising the importance of the cultural and linguistic skill these teachers already possess.