Using Art for Learning and Expressing in Hulas (2012) 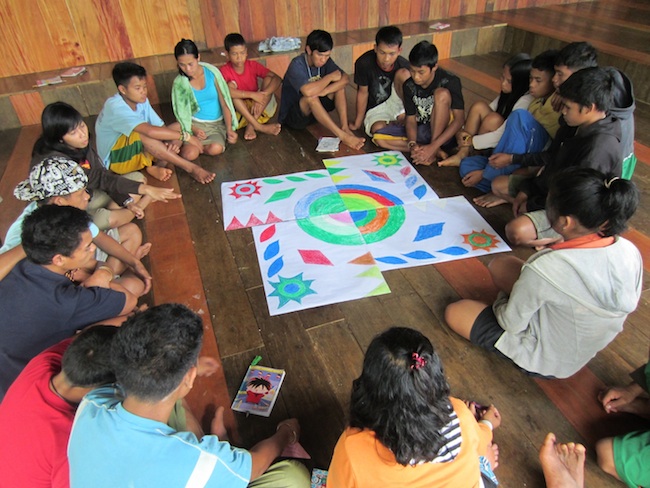 Using art for reflecting and sharing

Teaching young adults who are not in school and who generally have lost interest in formal education due to many years of not studying is most challenging.

Formal teaching methods and instructional materials are often not applicable. One must carefully design modules and plan activities for students who can only do basic reading and writing and have short attention spans. There are more games, songs, and activities than lectures.

In facilitating Hulas, the two-month leadership and technical skills training ESSC undertakes for the youth of Upper Pulangi in Bukidnon, there is a need to approach differently the training and the teaching. Hulas is one of the regular activities of the Bridging Leadership in Mindanao project and the fifth batch is set to finish their training on 18 May 2012.

The previous four training batches allowed the development of a standard set of training activities around lessons in self-awareness, leadership, environment, culture and identity, and culture of peace. Games and creative activities were adjusted to the general personality of the training batch. One batch was more interested in role-playing and another batch more interested in singing and dancing.

For the current batch that started last 27 March, visual arts expression was identified as most appropriate for training and teaching, and for the youth to learn and express themselves. Working on a group project.

Writing can be restraining, frustrating, and limiting for youth who are not in school. One of the 17 Pulangiyen youth trainees for the fifth batch of Hulas knows only how to write his name and other basic information about himself. He lives in the small and isolated Sitio Magawa, Barangay Bulonay in the town of Impasug-ong, Bukidnon. He writes slow and cannot catch up with writing activities. While the training sessions are not heavy on lectures and note taking, there are certain activities that still require some writing. His co-trainees are always supportive, but it is still difficult.

When Hulas started, he was very shy, barely kept his head up, and only spoke with a few of his co-trainees, those who come from his own community. He rarely spoke with the trainers and often needed the assistance of youth volunteers during group discussions. But where he was confident in was during drawing sessions where students were asked to express their learning or explain a certain topic.

This enthusiasm in drawing is shared amongst most of the batch. They sketched to explain how they view environmental services. They used color to express their understanding of the culture of peace. They used indigenous materials to report what they learned about laws and leadership. They creatively visualized their feelings of happiness, frustration, and hope through sketches. They are the “Art Batch” of Hulas.

The use of art allowed the trainees to confidently speak in front of a bigger crowd because their work will not be judged as wrong. They eagerly shared their drawings and what these meant. Doing creative work allowed them to make use of their hands and imagination without restraint to find the right words. Drawing opened them up to a world of possibilities and hope.  Art became the main medium for instruction and also, the main medium for self-expression and learning.

It is not easy for the young adults not in school, especially with indigenous backgrounds, to speak in front of a crowd. It is not in their nature to speak publicly and they rarely have any occasion to practice such. Moreover, their mother tongue is vastly different from the national language, so the expression of one’s thoughts is often doubly hard if asked to translate to the national language.

But during their art activities in Hulas, they were not asked to think in terms of words. Instead, they were trained to speak through figures, shapes, and colors – a self-expression that is also universal. When explaining to the big group, they were not forced to speak outside their language but were free to speak in their mother tongue. The daily practice of speaking and explaining became second nature to most of the trainees that it was no longer difficult to engage with others even those outside their group.

By the fifth week of the training, the shy youth trainee from Sitio Magawa volunteered to perform in front of a big and “international” crowd. He led the cultural performance during the learning visit of students from the UN-mandated University of Peace students from 12 different countries. He performed a “dasang,” a traditional performance and a spontaneous expression of an event in one’s life, delivered in a semi-melodious tone like a rap cum chant. The dasang expressed his happiness in the presence of foreign visitors, his joy in meeting and making new friends, and his hope that the visitors also appreciated getting to know him and the rest of the Hulas trainees.