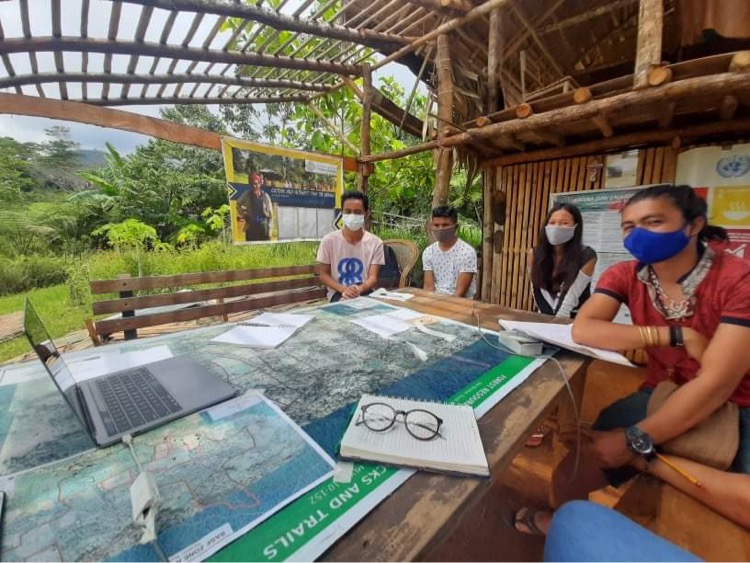 During the Global Day of Climate Action, calls from young people, environmental groups, health workers, educational institutions, human rights groups, and other concerned sectors amplified the urgent need to listen to the voices of Indigenous Peoples in responding to the climate crisis.

The recognition and protection of Indigenous Peoples’ rights were urgently shared in a press conference organized by Youth Strike 4 Climate Philippines on 23 September entitled Para sa Klimabukasan that brought together over 70 national and regional organizations advocating for climate justice.

With October commemorated as National Indigenous Peoples month in the Philippines, these calls are especially critical at a time when the country is ranked the deadliest country in Asia for environmental defenders and second in the world next to Colombia, according to Global Witness in its July 2020 report, Defending Tomorrow: The climate crisis and threats against land and environmental defenders.

There are increasing reports of Indigenous Peoples robbed of their lands and pushed to mountain ridges to avoid conflict, while those who stand up for their ancestral domain are tagged as terrorists. Many indigenous youth continue to experience armed conflict as a daily reality, and livelihood opportunities rooted in the culture are limited because of environmental degradation.

For decades, Indigenous Peoples in the Philippines and in other parts of the world have been dealt the hand of armed encounter, when what is needed is meaningful engagement.

In the press conference, Environmental Science for Social Change Director for Research and Apu Palamguwan Cultural Education Center (APC) Director Pedro Walpole SJ spoke on behalf of the indigenous Pulangiyēn community in Mindanao, sharing their call for change towards climate justice. He laid out six points drawn from discussions with the youth and years of engagement with the community:

1. We need to listen to the voice of indigenous youth and engage them through dialogue. As a society, we have a responsibility to provide indigenous youth a space and a platform to share their concerns, to discuss what they want to do about the climate impact as it grows, as indigenous leaders who want to seek a transformative change.

2. Support for culture-based multilingual education highlighting environmental education is integral. Empowering indigenous youth fundamentally means re-thinking how we understand and do education. We need an education system that celebrates the diversity of culture within our country. An education that is rooted in the interconnectedness of people, lands, and climate. This is where we draw our strength from as a nation.

3. We must engage the business sector in a critical shift to a circular economy. The present market system does not allow for those in the margins to put themselves out of poverty and to care for creation. The economy needs to focus on building the public good and protecting the cultural landscape.

4. We need to accompany indigenous youth in sustainable livelihood opportunities. Consumption and the changes in the landscape impacting climate directly affect livelihood opportunities. If indigenous youth lose the forests to infrastructure development, or if the seas become so damaged that biodiversity is no longer thriving, where do these youth go living as a culture?

5. We need to uphold, protect, and defend the rights of Indigenous Peoples to manage and sustain their ancestral lands. This has been part of the 1987 Philippine Constitution, yet we still have to affirm and implement it fully.

In an effort to respond, the Pantawid Pamilyang Pilipino Program (4Ps) or the Philippines’ Conditional Cash Transfer (CCT) program is a laudable effort that genuinely assists, even with all the complications and challenges. The 4Ps is a human development program that invests in health and education of poor households, particularly those with children aged 0-18 years old. It is patterned after the CCT schemes in other developing countries and provides cash grants to beneficiaries, that includes indigenous communities, with the requirement to comply with set conditions. Since the 4Ps started in 2008, the program has served more than five million poor households as of January 2020. On April 2019, Republic Act No 11310 was signed institutionalizing the 4Ps as the government’s national poverty reduction strategy.

The most important contribution of Indigenous Peoples to climate action is their culture, their way of life. Culture is learnt and lived in the ancestral lands. Our collective future depends upon Indigenous Peoples who are the guardians of the ecosystems that benefit all, and not just simply depend on the might of infrastructure.

6. We must assert the rights of indigenous youth to live a life free from fear. Indigenous leaders must be able to express their concerns and aspirations without the fear of persecution or harassment. Indigenous youth must be able to go to school without fear of armed conflict and violence. Sustaining peace across the land is a central element of the life of Indigenous Peoples. It is intertwined with their ancestry and the vision they have for the future.

In the last two years, APC students have taken the lead in representing indigenous voices in the global climate movement through the tapok(youth summit) where they gather youth from other indigenous communities to talk about the role of Indigenous Peoples in leading climate action. This year, despite the pandemic, some of the Pulangiyēn youth joined the online press conference in solidarity with other young people calling for climate justice.

The indigenous youth in Upper Pulangi are at the center of climate action in Mindanao. As part of the wisdom of their culture, they are taught about their relationship with the Creator and creation, hence the way they deal with the land, forest, and water, is drawn from a place of relationship and respect.

This story was also published in Ecojesuit Online.