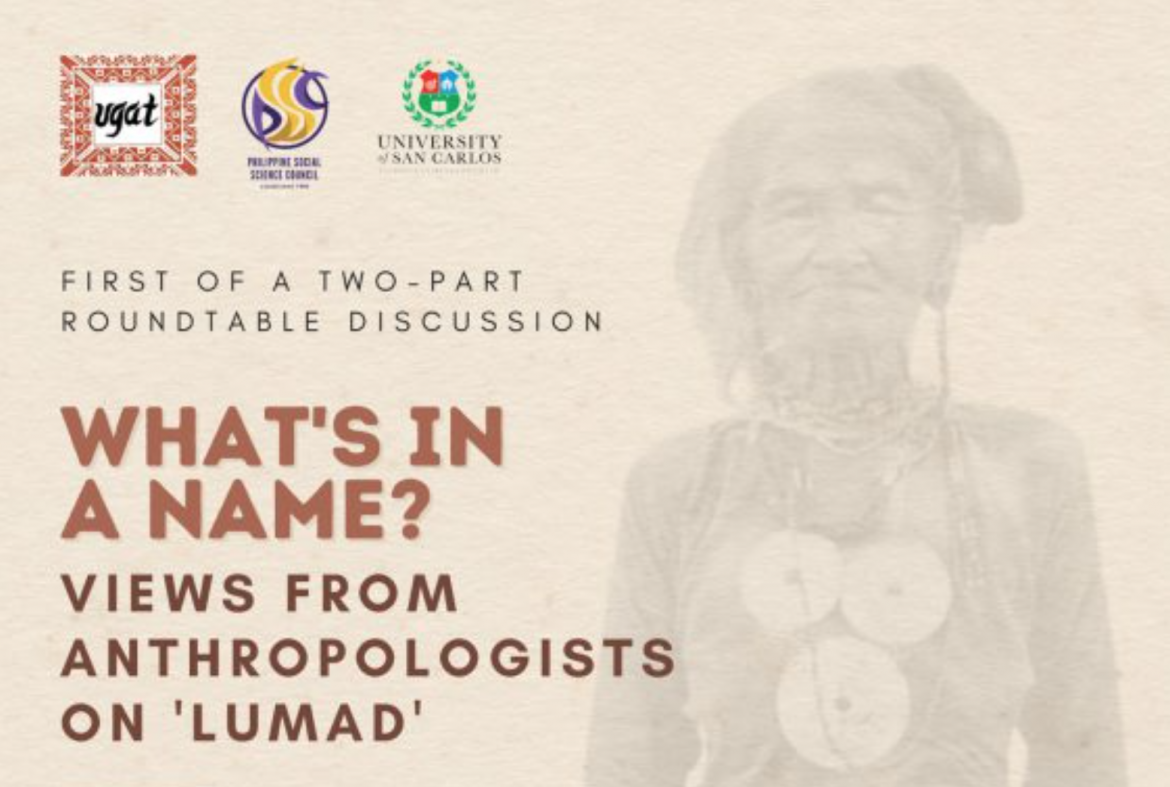 APC shares the presentation of Dr Augusto “Gus” Gatmaytan, Associate Professor at the Department of Anthropology, Ateneo de Davao University and Director of the Ateneo Institute of Anthropology and a worker for Indigenous Peoples since 1985, in a recent roundtable discussion organized by Ugnayang Pang-Aghamtao (UGAT)/Anthropological Association of the Philippines, in response to the resolution issued by the National Commission on Indigenous Peoples (NCIP) on the use of ‘Lumad,’ a collective term used since the late 1970s in referring to Indigenous Peoples in Mindanao.

Dr Gatmaytan’s presentation, Notes on the NCIP resolution on ‘Lumad’, analyzed the “invented crisis” that the NCIP came up with and stressed the right of Indigenous Peoples to self-ascription and that this is rooted in their fundamental right to self-determination. “The NCIP should honor and respect their will, refrain from agitating or terrorizing others from using it, and listen to and learn from their Lumad constituents.”

Please allow me then to focus my remarks on this resolution.

Certainly, there have been, and there are, people who dislike it, or do not use it, or cannot relate to it, but this hardly amounts to a ‘clamor.’ What evidence is there of this ‘clamor’? Everyone was getting on with their lives until the NCIP came up with this invented crisis. Why is the NCIP trying to project the existence of such a ‘clamor’?

The resolution states that the ‘emergence’ of the name Lumad is ‘marred’ by its association with the Communist Party of the Philippines-New People’s Army-National Democratic Front (CPP-NPA-NDF). As the Ecumenical Commission on Indigenous Peoples (ECIP) recently pointed out however, the ‘emergence’ of the term is linked to the pioneering pastoral work of the Catholic Church in Mindanao and Sulu in the 1970s, which developed without an ideological agenda, even as it strove to support indigenous communities suffering at the hands of a repressive state and exploitative business interests.

It would thus seem that rather than the CPP-NPA-NDF coining or appropriating the term, they were only following the lead of the Church and its indigenous community-partners by ‘riding on’ their growing or continuing use of the name. But even if the CPP-NPA-NDF did use the name in their organizing or fund-raising work, what of it? Should we similarly stop using the words Islam or Islamic because it has been marred by its association with the Maute group and the extremist interpretation of Islam championed by ISIS?

The resolution decries how the name Lumad is not an indigenous term. However, there is no pan-Mindanao indigenous term for the aboriginal peoples of the island, taken as a group. The resolution does offer alternative terminology, but these are all in English or Filipino/Tagalog. Lumad may be a Visayan term, but at least it does not recall our colonial subjugation or reiterate the political and cultural dominance of imperial Manila. More importantly, it was the indigenous communities of Mindanao themselves who gradually adopted or appropriated the name Lumad as a way of asserting a shared identity or location. In other words, they have made it their own; just as the Bangsamoro have made the very non-indigenous term Moro their own.

The resolution argues that Lumad should not be used because the LMPF leaders who allegedly adopted the term are not the ‘recognized representatives’ of the Indigenous Peoples of Mindanao. First, it is not clear at all if it was the LMPF that first adopted the name Lumad. Given the information brought to light by Carol Arguillas of MindaNews, that the name had been in use since the late 1970s, the resolution’s claim becomes highly debatable. Other groups or individuals might have previously adopted the name already, but had neglected to document the occasion. Second, this argument betrays its proponents’ lack of historical awareness.

In the 1980s and 1990s, there was no island-wide mechanism for selecting the ‘recognized representatives’ of all Indigenous Peoples of Mindanao. On one hand, the indigenous groups of Mindanao have historically been uncentralized, acephalous polities, organized into largely autonomous settlements or villages. On the other, there were in the 1980s and 1990s only separate, relatively small networks of communities and leaders, linked together by Churches, or by NGOs, or by indigenous peoples organizing initiatives, or by local politicians, or by the Presidential Assistant on National Minorities (PANAMIN) and the Office of Southern Cultural Communities (OSCC).

What seems to have happened is that indigenous leaders, advocates or organizations — on their own, or taking their cue from Church workers, non-government organizations (NGOs), or yes, leftist ideologues — began to refer to themselves as Lumad. This appropriation of the Visayan word Lumad represents the historical moment when indigenous leaders in communities across Mindanao, who until that point had been relatively isolated from each other, realized that they shared histories of displacement, violence, and discrimination; faced a common set of problems; and similarly aspired to recognition and development. These shared characteristics provided the basis for a collective identity, an identity they have over time chosen to refer to as Lumad.

As members of marginalized groups, these leaders and advocates could not force other peoples, groups or communities to do the same. But over the succeeding 40 years, other indigenous organizations and communities all across Mindanao, have similarly adopted or used the name Lumad. This suggests that with their growing links to the political, economic and cultural mainstream, more and more indigenous communities and organizations have also begun to think of themselves not as isolated communities, but as a part of the indigenous peoples of Mindanao, taken as a group. This is the beginning of a pan-Mindanao indigenous consciousness, and of what Karl Gaspar calls the Lumad social movement.

This is not to say that they have abandoned their own names for their own peoples. The politics and processes of identity formation allows someone, for example, to be:

2. A member of a family, as designated by a surname or family name

3. A member of the Arumanen Manobo of Carmen, North Cotabato

4. A member of the Cotabato Manobo group, along with the Ilianen and Kirintiken Manobo, but not the Umayamnon or Adgawanon Manobo of the Agusan region

5. A Lumad, along with the Subanen and Mandaya, but not the Kalinga or the Buhid

6. A member of the indigenous population of the Philippines;

The complex and fluid nature of identity formation provides members of indigenous groups different ways of referring to one’s self or one’s group in differing contexts, and/or for different purposes. These various ways of describing one’s self do not contradict each other. One does not surrender one’s identity as Higaunon or B’laan by using the name Lumad, any more than being a proud Cebuano makes one less Filipino. No one is confused by this, except perhaps for the NCIP.

In the field, it is the indigenous communities’ own names for themselves that are used in local settings. The term Lumad is employed only as a sort of casual or conversational alternative for the local people’s name, or when referencing the Indigenous Peoples of Mindanao as a group; e.g., to compare the situation of Indigenous Peoples in Mindanao with those of Palawan. In other words, it is used as a collective name to refer to the Indigenous Peoples of Mindanao, in the way that Igorot or Kaigorotan and Moro or Bangsamoro are collective terms for groups of peoples who share certain historical, political, and cultural characteristics.

The resolution finally asserts that there are no ancestral domains or territories under the name of Lumad, implying that there is no such things as a Lumad. It is true that there are no territories under the name of Lumad, but this proves nothing. The name Lumad was not intended to replace the various endonyms of Indigenous Peoples of Mindanao, nor is it used that way. Members of Indigenous Peoples or communities know that they are T’boli, for example; and that their domains and territories belong to them as members of the T’boli people, not as Lumad. It is not surprising then that they claim their ancestral domains as T’boli.

Having said that, there are still circumstances when they might find the name Lumad to be useful.

The NCIP resolution thus fails to justify its call for ending the use of the name Lumad. What the NCIP resolution does achieve is to reflect this moment in our political history, when we witness the dawn of an Orwellian dystopia where the state seeks to control how people think by controlling how people use language. It seeks to persuade people that using the name Lumad is to be associated somehow with the CPP-NPA-NDF.

Indigenous Peoples have the right to self-ascription, which is itself rooted in their fundamental right to self-determination. They have the right to determine, among other things, their own name or names. There are examples of Philippine groups choosing how they are to be called. The best-known example are the Ilongot of Nueva Vizcaya, who sometime in the 1980s began to call themselves Bugkalot. Here in Mindanao, the Bukidnon of Songco, in Bukidnon province now call themselves Talaandig, and some of the Manobo communities in the Davao-Bukidnon boundary area now call themselves Matigsalug.

These choices have all been respected; why should the case of Lumad be any different? If indigenous organizations or communities wish to call themselves Lumad to reference their being part of the indigenous population of Mindanao, then that is similarly their right. The NCIP should honor and respect their will, refrain from agitating or terrorizing others from using it, and listen to and learn from their Lumad constituents.

Dr Gatmaytan shared his presentation as one of the discussants of the first of the two-part online roundtable discussions entitled What’s in a Name? Views from Anthropologists on Lumad  organized by UGAT in partnership with the Philippine Social Science Council and hosted by the Department of Anthropology, Sociology, and History at the University of San Carlos on 25 March 2021. The second part, Kinsa ang mga Lumad? Views from Indigenous Leaders, was held on 27 March.