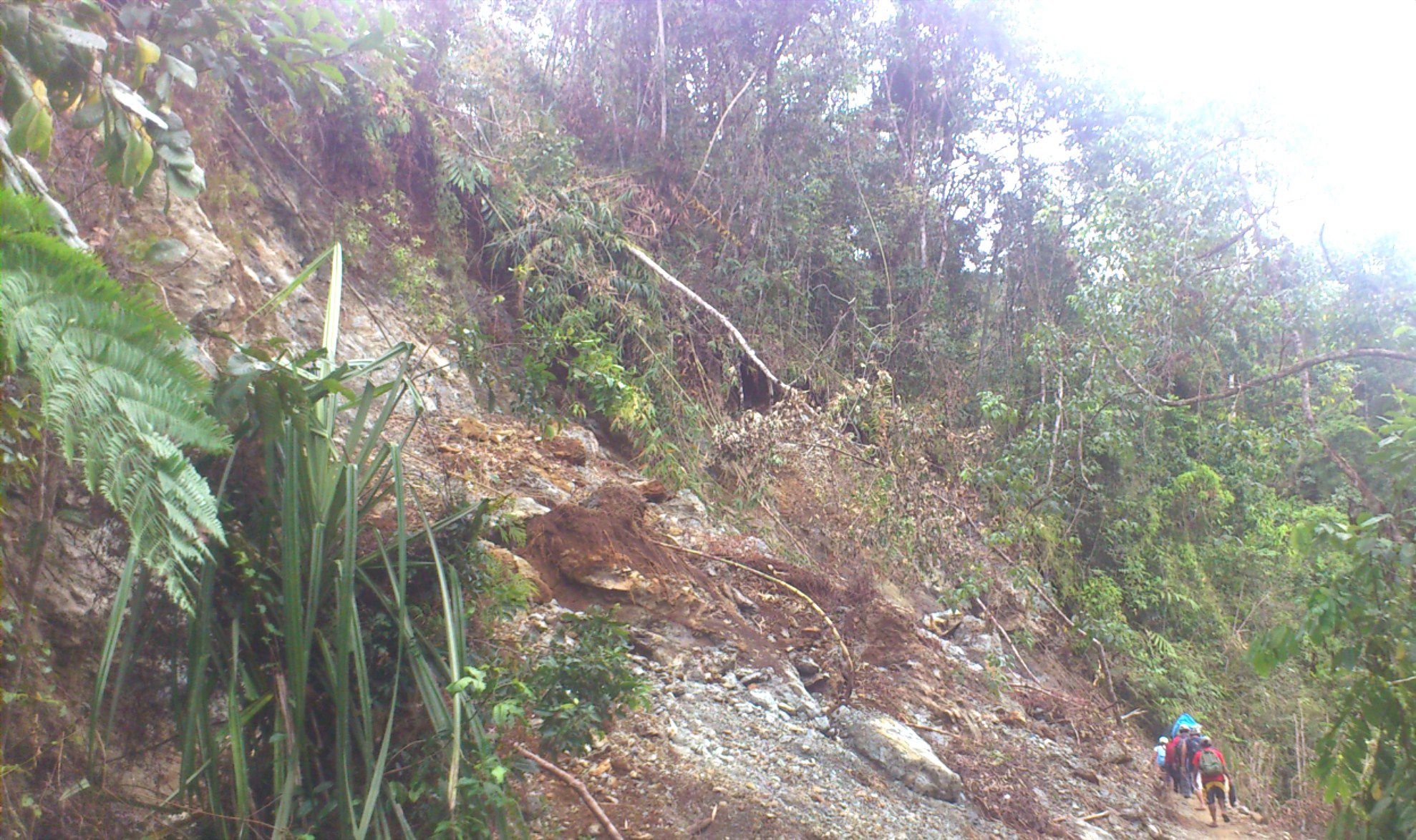 Atmospheric view of the typhoon

On November 23rd 2012, a moderate atmospheric circulation developed over Marshall Island, part of the Micronesian Island chain in the Northern Pacific region over 5,000 km to the east of the Philippines.

By 9.00 pm on the 25th, both the Joint Typhoon Warning Center (JTWC) and the Japan Meteorological Agency (JMA) classified the system as a tropical depression. It reached tropical storm intensity by the following day, and was named Typhoon Bopha (Pablo in the Philippines).

By 5am December 4th, the typhoon made landfall over Baganga, Davao Oriental as a category 5 Super Typhoon, with winds over 200 kph and a well-defined eye. Public storm warning signals were issued in Mindanao on December 3. Storm signal 3 was declared over Bukidnon and schools and offices were closed.

By the 5th of December, over 800 people had been declared missing, with 620 confirmed dead. More than 300,000 people were forced into evacuation centres2 as floods and landslides caused destruction across Mindanao.

The super typhoon’s eye passed directly through Bukidnon, moving up the Pulangi River and passing over Bendum. The following is Fr. Pedro Walpole’s account of Typhoon Bopha as he experienced it, together with the Pulangiyen community in Sitio Bendum.

“The rains started during the afternoon planning meeting for Kaamulan, the annual cultural gathering. ESSC staff warned that storm signal number 1 had been raised, so I decided not to push through with previous travel plans. I told those present at the meeting that a typhoon was set to hit northern Mindanao and we needed to consider what to do. In the previous year, Sendong brought heavy rains but not much wind, and this was going to be a different kind of storm.”

“The light rains continued with some breaks during the night.”

“By breakfast, the rains were continuous and Mercy, one of the local teachers, came to say that they wanted to send the children home from school, as some had arrived in wet clothes. Information from staff in Manila reported that storm signal number 3 was now raised. At this point, communications ended. We were prepared to open the school where there was water and sanitation and to cook together in the outside kitchen by the Adagi Balay3.”

“Winds began to gust from the north by 9am, and dorm kids were sent to study in the dining room of Adagi Balay. Soon, trees were cracking and though some branches came off, none hit the house. People from the village were gathering in the Livelihood Building because it was a cement structure. But because there were few rooms there and access to the kitchen was difficult, so we decided to move people to the school.”

“The winds began to subside, and more people gathered in the Livelihood Building from the north and western parts of the village. Some houses had already lost their roofs. Fallen trees hit some houses, including those of local teachers and the Datu’s Tulugan4, but there was minimal damage and no casualties. Behind the school library, a fruit tree had fallen, but the damage was minimal and the school building was still easily accessible from the front.”

“Power lines came down in a few places, although power had already been cut off from the local service provider. Rather than cook in the dirty kitchen, we moved the cooking inside, as the trees around the house were breaking up. More trees had fallen near other houses in the community, and I was unable to reach people as winds were rising again and roofs flapping. The returning winds started this time from the south, and I realized that we were in the eye of the typhoon, and it was coming back to hit us again.”

“The wind finally died down by noon, and everyone was out assessing damage. Many had lost their bamboo roofs, and whatever they had not bagged was wet. Most did not eat until past 1pm; rice was continuously being cooked and handed out, although a few had cooked their own food and brought it to the school. By early afternoon, people felt safer, and although they were tired, they were easier of heart. Later, it became clear that many were not going home and 21 families set up in the school for the night.”

“On the way to the hydro-power house, some logs had washed down the side stream coming from the road and the water was very red. Power from the micro hydro system was down, but once the grill had been cleared of leaves and the tank washed out, the generator started without trouble, restoring power to the school and the dorm, where families from the village were staying.”

“That evening, people gathered at the school and enjoyed being together, despite the circumstances. We cooked rice for about 70 that evening, but it did not seem to be enough. We also had a mass in the school; people sang and were generally at ease for the night, as the situation was no longer threatening.”

“Early in the morning, people began returning to their houses. People from the village contributed their share to the breakfast, although we ate late due to the time it took to cook and distribute so much rice.” Landslide on the road to Bendum

“We learned that three houses in Barangay Busdi have been swept away by the expanding river going to the Pulangi. Later, people went down to Busay5 on the way to St. Peter where six trees had to be cleared from the road. The logs laid down for the road used by the logging companies had destroyed the spillway, and shale had slid down the hillside, blocking the access road completely. Motorbike owners worked pahina6 on road clearance, and opened a narrow path across the shale.”

“Zamboangita had no power, and more importantly, the water supply had been broken in several places. Water rose in the high school scholar’s dorm, but there were no floods with a strong current. Roofs were lost from the boys’ house and kitchen, but people were fine.”

“Back in Bendum, the children were cleaning around the house, especially by the out-kitchen and main path. It was a sunny day, and at moments, I would catch myself enjoying the activity and finding it hard to realize we were clearing up after a typhoon. As it was a beautiful day, I walked to the brow on the western side of the village to see the Pulangi. It was the reddest I had ever seen it, with whole new gravel beds emerging.”

“That evening, children studied until 7.45pm, and returned to the dorm very tired. There were still some people from the village in the dorm, and one extended family had returned to the school. There were some thunder bursts through the course of the evening, as the day had been warm, and at night, rain came again, but it was gentle.”

“After a breakfast of bingala and palao cooked in coconut milk, the children went to school about 7.30am. Cleaning in the school went on until about 10am, when classes resumed, and a sense of normalcy returned.”

“That day, we planned to assess the damage in the library and see what other reports the day would bring. Although the road to Zamboangita had been partially cleared, it would be days before vehicles could pass and there was still no electricity. We had water and access to food, if only root crops, and we were fine.” More landslides in the area

“Upon revisiting Busay, we saw that not only was there a landslide but the two small bridges were washed out. The road over the landslide is now very steep and narrow and in real need of reinforcement. The alternate route is to use the lower junction section through the mud. Since it rained for two nights, the Namnam River was high, but passable by the afternoon.”

“We only then heard reports of the devastation in Compostella Valley – of the great destruction and loss of life.”

“Communications finally came back but were shaky as always. The extent of the damage was becoming clear: flattened crops, maize, rice, saging and gulay, cassava—all gone.”

“Despite the challenges brought by the storm, there is a deep sense of gratitude that Bendum was able to pull through, and for the moments of joy in being together as a community. There is also a great appreciation for how the community, especially the youth, responded to the needs of those affected by the storm.”

3 Literally, “big house”. It is used to welcome visitors and for community gatherings.

4 Tulugan is traditionally the datu’s house, which is open to everyone who needs a place to stay

5 This is a small waterfall.

7 Bingala and palao are root crops.