Achieving the Millennium Development Goals: Progress towards ‘Opportunities for All’? (2013) 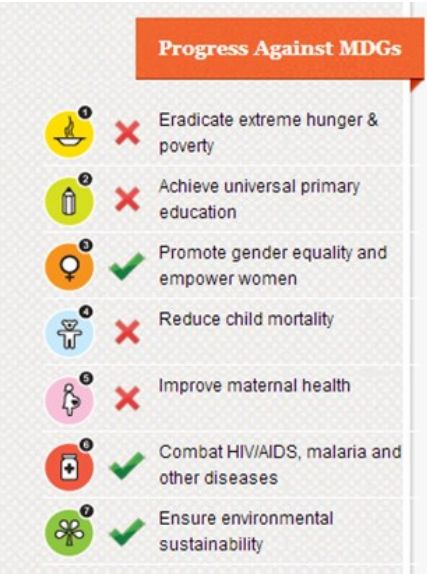 With just over 1,000 days left until the Millennium Development Goals (MDG) 2015 target date, the United Nations Development Program and its partners from across the world gathered in Colombia last week to share experiences and continue the momentum towards achieving the MDG’s.

As part of its Comprehensive Aid Policy Framework to 2015-16 (CAPF), Australia released the first Annual Review of Aid  Effectiveness  (ARAE)  in  December  2012.  This  new  framework  also  sought  to  assess  its  achievements  over  a three tiered process  –  reporting on progress towards the MDGs, articulating the contribution of Australian aid to outcomes, and measuring operational and organisational effectiveness.
As a major economic power in the Australasia region and one of the 189 countries who agreed to the 8 MDG goals, Australia’s program for aid is tuned to five major strategic goals. These are saving lives, promoting opportunities  for all, sustainable economic development, effective governance, and humanitarian disaster preparedness and  responses. Through these five strategies, AusAID also addresses the MDGs. Its self-proclaimed flagship strategy ‘promoting opportunities for all’ is aimed at achieving universal primary education (MDG target 2a).

Australia is the leading bilateral grant donor for basic education in the Philippines, and is contributing over $30 million annually1 towards efforts to increase enrollment and retention rates and improve the quality of education
in the Philippines.

Education for All at the Global Level – an Indigenous Perspective

At first glance the global progress towards achievement of the MDGs, particularly in relation to education, seems positive. Global completion rates for primary education rose from 81% to 90% between 1999 and 20102. The youth literacy rate grew from 84% to 90% globally over the same period.

However, it is estimated that 61 million children of primary school age are out of school globally2, 20 million of which are in the Asia-pacific region3. Retention and completion rates of  elementary education are a major factor in the Asia-pacific region, with approximately 86% of students in Indonesia, and approximately 76% of students in the Philippines reaching grade 64.

The UN Permanent Forum on Indigenous Issues criticised the lack of specific monitoring of progress in relation to Indigenous Peoples, the preference given to monetary income s over the informal subsistence economies which fulfil the basic needs of indigenous peoples and the lack of consideration of the indigenous way of life as alternative to the mainstream ‘not only in the economic sense, but also as the underpinnings for social solidarity and cultural identity’7.

Comparable figures for the Asia-pacific region are lacking from the MDG reports, despite estimates that 70% of the world’s  indigenous  peoples  are  in  the  Asia-pacific  region9.  Statistics  gathered  in  2004  by  the  EED-TFIP  Network show that in the Philippines only 53% of indigenous adolescents have completed primary education10, compared to the national average of 95%11.

In  response  the  2008  the  UNDP  published  guidelines  which  aimed  to  mainstream  Indigenous  People’s  issues, including a framework for a human rights based and culturally sensitive approach to development12.

The UNDP’s MDG website also describes the efforts made to address tenurial security of indigenous people’s communities in the Philippines as part of its strategy to reduce poverty13.

AusAID Reporting in the Context of the Philippines

In  its  Thematic  Strategy  for  Opportunities  for  All  2011  (TS),  AusAID  states  that  ‘education  makes  a  significant difference to improving equity, health, empowering women, governance and sustainable development’14. Indeed, as  part  of  the  CAPF  policy  Australia  has  sought  to  set  standards  for  aid  predictability,  transparency  and accountability15, while increasing its budget from 4.8 billion to 7.7 billion during the period 2011-12 to 2014-1516. However, while both the CAPF and TS documents allude to incidence of poverty among indigenous people, there is no direct acknowledgement or commitment to an approach which seeks  to either directly address or monitor the indigenous experience in relation to AusAID poverty reduction strategies.

Despite  these  shortcomings,  the  Philippines  in  cooperation  with  AusAID  has  a  number  of  education  initiatives which seek to address MDG goal 2, address AusAID’s strategy which aims to strengthen systems of governance and service delivery3 and develop systems which ‘recognise distinct indigenous identities and the multicultural nature of the state’12.These initiatives are the Philippine Social  Protection Initiative, the Basic Education Sector Reform  – Support for Philippine Basic Education Reforms (BESR-SPHERE), Basic Education Assistance for Mindanao (BEAM)
(focussed on the Autonomous region of Muslim Mindanao  –  ARMM), and the Philippine response to Indigenous and Muslim Education (PRIME).

BEAM has supported 221 schools in Mindanao to introduce Kindergarten curriculum with Islamic values, and 25 Madaris  schools  to  introduce  peace  education  modules  in  conflict  affected  areas  of  Mindanao,  while  PRIME  is aimed at improving access to quality education in regions with the lowest education indicators1.

Unfortunately  the  most  up  to  date  MDG  reports  show  enrolment  and  attendance  rates  continue  to  be  lowest among rural, poor and conflict affected areas2. Despite high figures for enrolment in ARMM (99.9% 17), Mindanao has  the  lowest  figures  for  continued  attendance  (cohort  survival  rate)  of  elementary  school  within  the  country, with the lowest in ARMM at 40.8%, followed by regions 9, 11 and 1217.

It  is  unsurprising  then,  that  ARAE,  while  receiving  praise  as  a  signal  of  AusAID’s  commitment  to  be  more accountable  and  transparent,  has  also  been  critiqued  for  its  failure  to  provide  critical  and  detailed  information about AusAID’s operational and organisational effectiveness, both at country and program levels3.The information provided is at highly aggregated levels and gives no breadth to the importance of qualitative efforts to building the capacity  of  partners  to  deliver  qualitative  results  and  improvements.  Even  AusAID’s  Annual  Review,  released  in October last year, while providing more of a breakdown in regards to country and sector initiatives, includes no mention or monitoring of the impact on different sectors of the population, such as Indigenous Peoples.

The  Philippines  are  unlikely  to  achieve  all  of  the  MDGs  by  the  2015  target  date,  especially  with  regards  to education. While data is undoubtedly difficult to obtain regarding the impact on indigenous peoples18, Australia’s top 20 recipients of aid all have high indigenous populations who live predominantly in the regions where there is the highest incidence of poverty and lowest levels of educational availability and attainment. This should make the monitoring of the indigenous experience worthy of note in the annual reports.

Looking  forward,  the  challenge  for  the  AusAID  programs  beyond  the  2014 -15  period  is  understanding  the relationship between poverty reduction strategies and strategies aimed at responding  to the rights of indigenous peoples, particularly in regards to education.