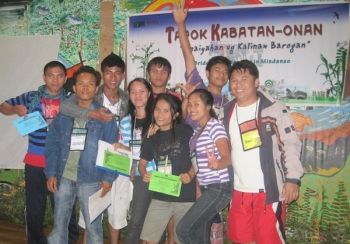 Risajean “Didang” Luardo is a 17-year old Pulangiyen who attended the Annual Youth Gathering or Tapok Kabatan-onan last March 2012. The Tapok gathered Pulangiyen and Umajamnen youth along the Upper Pulangi area of Malaybalay. Didang is currently enrolled in the BS Education degree program at the Bukidnon State University in Malaybalay. The Tapok was Didang’s first experience of youth engagement among indigenous youth like herself. This is also the first time that she was asked to reflect and write about her thoughts.

I belong to the Pulangiyen tribe here in Upper Pulangi, Malaybalay, Bukidnon.

While I am confident of our culture and traditions, I only know of a few other Pulangiyen youth outside the community I grew up in which is Sitio Nabawang, a neighboring sitio of Bendum, both in Barangay Busdi.

Then I joined the Tapok Kabatan-onan activity last March 2012. While I and the other the Pulangiyen youth were supposed to share the same, if not similar, traditions, we did not really know each other and were unaware of the history that bind us together. Apparently, some of us were distant cousins and probably bumped into each other in the limited number of buses that travel along Upper Pulangi. That was why meeting other young people from similar roots was one of my most memorable experiences during the Tapok.

We had the first activity, a game called “Human Gakit (Raft),” where we had to work together as a team. It was not easy at first as we barely knew each other and we were a bit shy about being physically close to one another.  Nevertheless, by the end of the game, our determination and strategy prevailed. It was only a game but I realized that I could relate to it meaningfully.

My life will always have trials and it will require the best of me during each one. I will have to work within my limitations but there will always be other people who can help me along the way. What is asked of me is to be open and to listen to other people’s views and opinions.

In the game, we had to listen to one another, work out our differences, and move as one to accomplish the task. We were not the first team to cross the finish line but we were able to achieve what was asked of us.

I was amazed at how quickly my team and I got close to each other. In a span of a few hours, we were sharing and laughing together like we were long-time friends. This was during the formal group discussions as well as informally in between the sessions and during meals. Some of us were quiet. Others were talkative like myself. But everyone displayed a sense of respect and openness to one another. Our conversations were easy and flowing perhaps because we didn’t have any language barriers between us as we could speak our mother tongue.  And also because we were all the same age, we could easily relate to each other’s experiences.

Our closeness was further enhanced when we were asked to develop a creative presentation as a reflection on a song about youth empowerment. We chose to dance to one of the songs while most groups did short plays. Everyone contributed to the dance steps and danced in front of the big crowd. We had less than two hours to develop and practice the dance, yet we were able to perform a full dance number and had lots of fun preparing.

By the time we had our farewells, our facilitator asked us to distribute our certificates of attendance to one another. Each had someone else’s certificate and was asked to describe the person who will be receiving the certificate. It was surprising how each of us was able to say so many things about each other when we were only together for two days. To me, it showed how much we valued our time together and maximized the opportunity to get to know one another. Up to now, I still remember what we said about each other and it brings a smile to my face.

The Tapok was definitely an experience I will never forget. It allowed me to meet so many new friends and also left me with important life lessons: lessons like being open and respectful to other people, and being determined in life. It also reminded me of the richness of the history of our ancestors in Upper Pulangi. It made me even more aware that while I am here in the city center of Malaybalay, studying for a university degree so I can become a teacher someday, I must never forget who I am and where I come from. I should never be ashamed of my tribe, the Pulangiyen tribe, which might be considered a small tribe compared with others, but is a significant people and community in Upper Pulangi that values peace and respect for others.